The capture reached the German Embassy in Tokyo on 5 December. The German Naval attaché Paul Wenneker had the summary of the British plan wired to Berlin, while the original was hand-carried by Kamenz to Berlin via the Trans-Siberian railway. A copy was given to the Japanese, to whom it provided valuable intelligence prior to their commencing hostilities against the Western Powers. Rogge was rewarded for this with an ornate Samurai sword; the only other Germans so honoured were Hermann Göring and Field Marshal Erwin Rommel.

After reading the captured Chief of Staff report, on 7 January 1941 Japanese Admiral Yamamoto wrote to the Naval Minister asking whether, if Japan knocked out America, the remaining British and Dutch forces would be suitably weakened for the Japanese to deliver a death blow; the Automedon intelligence on the weakness of the British Empire is thus credibly linked with the Japanese attack on Pearl Harbor and the attack leading to the fall of Singapore.

I am sorry to have not yet been able to get hold of the document which was sent to you by Lord Newall when you were out in Singapore, and I have to go away with the C.A.S. for a few days and will not be back in the office until Thursday of next week.

The circumstances as I remember them are that Lord Newall in the late summer of 1940 sent to you a Chiefs of Staff Appreciation of Far Eastern Strategy (1). It was realised that this document never reached you, but it was not until the collapse of Germany that the Intelligence investigating teams discovered the document in the German Archives in Berlin. I remember seeing the document when it was brought back to this country at the end of 1945, and the German translation accompanying it, and as far as I can recall somebody had written across it. “This is a document of first importance and should be sent to N.A. Tokyo”. It has been alleged that this was Hitler’s writing but without having access to the document I cannot say for certain.(2)

It subsequently transpired the Lord Newall’s letter and the document was sent by safe sea route! The ship carrying the papers was sunk by a German submarine, but it was not until after the war had ended that we discovered that the German submarine Commander had managed to obtain the secret documents from the ship before sinking it.

Donkin is still working with Hilary Saunders, and the next occasion I see him I will certainly ensure that he is aware of this occurrence in order that he may be able to obtain the papers. However, I hope to be able to get them myself in due course, and if I am able to do so, I will get in touch with you again.(3) 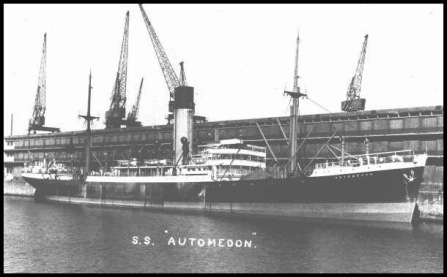